Clipping mask in Photoshop is the fastest and easiest way to show a part of an image through a shape or a text with just a few clicks.

Let’s say you have the word “Nature” and you want to fill it with a nice image. Follow the next steps:

1. Activate the Horizontal Type Tool on the Toolbar or press T, click on the canvas and write the word. To terminate the action, either press CTRL+Enter or click on the check mark on the Properties bar, also named Commit.

2. To center your text on the page, activate the Move Tool (shortcut: V), click on the text layer to select it, then press CTRL+A. Go to the Properties bar and click on the Align Vertical Centers and Align Horizontal Centers buttons. This works every time you want to center an element on the canvas, so you might want to remember this for future use.

3. Now let’s add the image. Go to File menu – Place and select the picture you want. Press CTRL+Enter or the check mark on the Toolbar to finish placing it on the canvas.

The general rule of the clipping mask in Photoshop is that the bottom layer works like a mask for the layers above it. So in our case, the text will be like a mask, a window through which you can see the picture that is placed on the above layer.

To make the clipping mask, make sure you click on the image layer to select it and then go to Layer menu and click on Create Clipping Mask or press ALT+CTRL+G. A faster way to do that is to keep ALT pressed and then move your cursor on the margin between the 2 layers. You will see the cursor changing its shape, telling you that it’s ready to apply clipping mask, so just click.

Other tips and tricks for Clipping Mask in Photoshop

If you want to change the “view” that you can see through the text, click on the picture layer and then drag the image inside the text until it looks the way you want or change the position of the text.

You can also make a new layer above, fill it with a color, let’s say blue, set the opacity to 32% and then hit CTRL+ALT+G and it will have a nice blue shade. So as you can see, through the text you can see multiple layers.

Of course, you can also put some text inside text or images inside shapes in the same way as I have showed you at the beginning of this article.

Another idea would be to put different pictures or textures for the letters. All you need to do is to place the pictures above the letters and then create the clipping mask.

You can also fill multiple shapes with parts of the same image so that it forms some kind of puzzle. To do that, first you have to create a clipping mask for one shape and the image and put them into a group, by selecting both of them (CTRL+Click on each) and then drag them to the Create new group button:

Then duplicate the group and move the shape from the duplicated group so it shows other part of the picture, resize it if you want. Duplicate the group for as many times you need and move the shapes until you manage to create a puzzle effect. Also, when you move the shapes, if you don’t want the image to move also by mistake, you can lock it so it won’t be able to move. To do that, click on the layer where you have the image and then click on the little locket, like in the picture:

You can also use brushes instead of shapes, for example the Soft Rounded Brush which will produce a nice fade effect on the edges.

If you want the original picture to show up in the background and the text through which you can see the image with more vivid colors, like in the picture below, just duplicate the image (right click on the image layer then choose Duplicate Layer) and then drag the layer right under the text layer. Then reduce its opacity to 50%.

If you want more words to appear, do like in the puzzle example: duplicate the 2 layers, change the text and move it in any direction you want.

There are many other examples for Clipping mask in Photoshop and you can discover them by playing a little with the effect, I just showed you the basics so you can have a clue from where to begin and what you can do with Clipping mask. 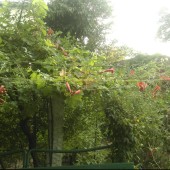 Banner design – How to make a web banner in Photoshop